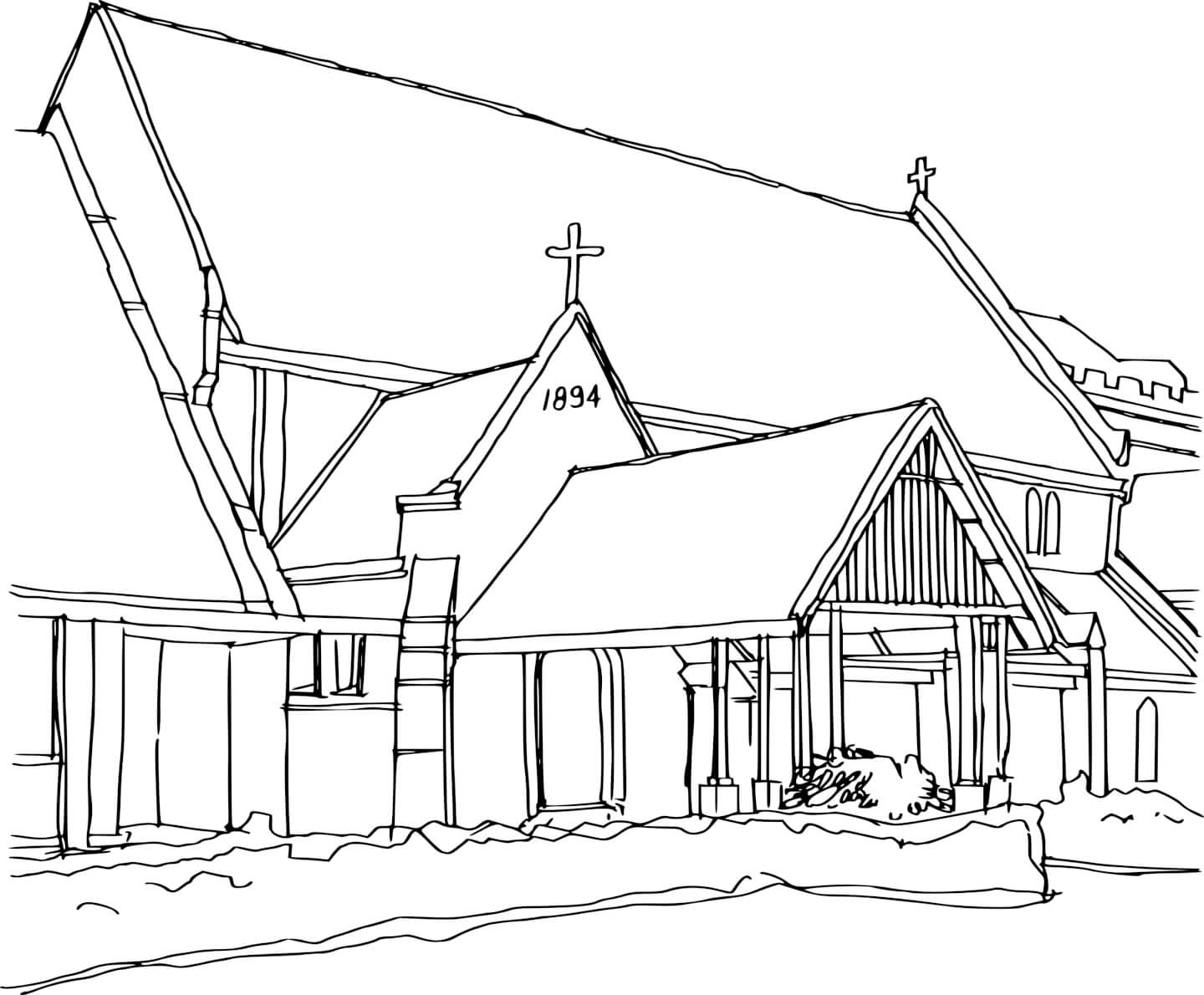 The original St Mary’s Church was consecrated by the Rt Rev George Frederick Hose, the Bishop of Singapore, Labuan & Sarawak, on 13 February, 1887. The original church was a simple wooden building located on Bluff Road on top of a hill now known as Bukit Aman, where the headquarters of the Royal Malaysian Police is now located. The wooden church which cost $1,363 to build accommodated 95 people at full capacity. It served as the centre for worship and spiritual life for the small group of Anglicans around Kuala Lumpur during that period.

In 1893, a decision was made to erect a new building to house the growing congregation and a new site was found beside the Padang or Parade Ground (now known as Dataran Merdeka or Independence Square) of the Selangor Club bounded on the north side by the Gobank River. The foundation stone was laid on Saturday 3 February, 1894 at 5.30 pm by the British Resident of Selangor, Sir W.H. Treacher, in a ceremony officiated over by Bishop G.F. Hose. The British Resident, armed with a silver trowel, laid the foundation stone of St Mary’s: ‘In the Faith of Jesus Christ and in the Name of the Father, the Son and the Holy Ghost.’

On February 9, 1895, the ‘first brick church erected in the native States of Malay Peninsula’ was consecrated by the same Bishop G.F. Hose in the presence of a large and representative congregation including the Rev H.W. Haines, Archdeacon Henham and Mr A.R. Venning. The pipe organ installed in the church was built in 1895 by Henry Willis, the famous English organ maker who also made the organ for St Paul’s Cathedral in London and the original Grand Organ of the Royal Albert Hall.

The back of the Main Church was extended to accommodate a hall called the Jubilee Hall.

On 28 April 1968, the foundation stone for a double storey annexe was laid by Rev Canon Paul G.T. Samuel. This annexe comprises an upper room, chapel rooms for administration and an office for the Vicar. In addition, there are utility rooms, a kitchen and living quarters for the Verger’s family. This built-in which replaced the ‘old wooden Parish Hall on stilts’, was dedicated by the Rt Rev Chiu Ban It, Bishop of Singapore and Malaya on 5 February 1969.

On 8 September 1983, St Mary’s Church was proclaimed the Cathedral Church of St Mary the Virgin by the Bishop of West Malaysia, the Rt Rev Tan Sri J.G. Savarimuthu.

Between 2006-2007 several renovations to the buildings took place. A new Multipurpose Hall was built and the existing Jubilee Hall was incorporated into the back half of the Main Cathedral. In addition, offices and meeting rooms were also added.

A sound-proofing project was carried out in 2012 to insulate the Main Cathedral from noise in Dataran Merdeka. In 2014, there was a major overhaul and reinstallation work of the historic pipe organ. The Multipurpose Hall was expanded in 2015 and more meeting rooms were created as well.

Today, St Mary’s still stands in its strategic location in the most historical and charming section of the nation’s capital. From here, the message that Jesus is Lord, that He died for our sins and rose again, and that God calls everyone to turn and trust in Him, continues to be preached.